Get all of the information you need to make informed decisions about buying and selling real estate right here!  We'll post the most important and relevant material to give you an "unfair advantage" over other buyers and sellers.

Selling Your Home? Price It Right From the Start! 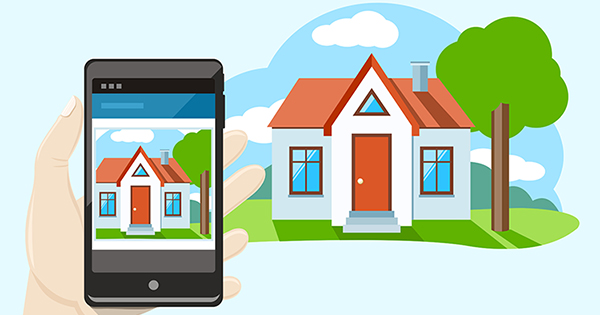 In today’s market, where demand is outpacing supply in many regions of the country, pricing a house is one of the biggest challenges real estate professionals face. Sellers often want to price their home higher than recommended, and many agents go along with the idea to keep their clients happy. However, the best agents realize that telling the homeowner the truth is more important than getting the seller to like them.

There is no “later.”

Sellers sometimes think, “If the home doesn’t sell for this price, I can always lower it later.” However, research proves that homes that experience a listing price reduction sit on the market longer, ultimately selling for less than similar homes.

John Knight, recipient of the University Distinguished Faculty Award from the Eberhardt School of Business at the University of the Pacific, actually did research on the cost (in both time and money) to a seller who priced high at the beginning and then lowered the their price. In his article, Listing Price, Time on Market and Ultimate Selling Price published in Real Estate Economics revealed:

Additionally, the “I’ll lower the price later” approach can paint a negative image in buyers’ minds. Each time a price reduction occurs, buyers can naturally think, “Something must be wrong with that house.” Then when a buyer does make an offer, they low-ball the price because they see the seller as “highly motivated.” Pricing it right from the start eliminates these challenges.

Many sellers say that they want to price their home high in order to have “negotiation room.” But, what this actually does is lower the number of potential buyers that see the house. And we know that limiting demand like this will negatively impact the sales price of the house.

Not sure about this? Think of it this way: when a buyer is looking for a home online (as they are doing more and more often), they put in their desired price range. If your seller is looking to sell their house for $400,000, but lists it at $425,000 to build in “negotiation room,” any potential buyers that search in the $350k-$400k range won’t even know your listing is available, let alone come see it!

One great way to see this is with the chart below. The higher you price your home over its market value, the less potential buyers will actually see your home when searching. 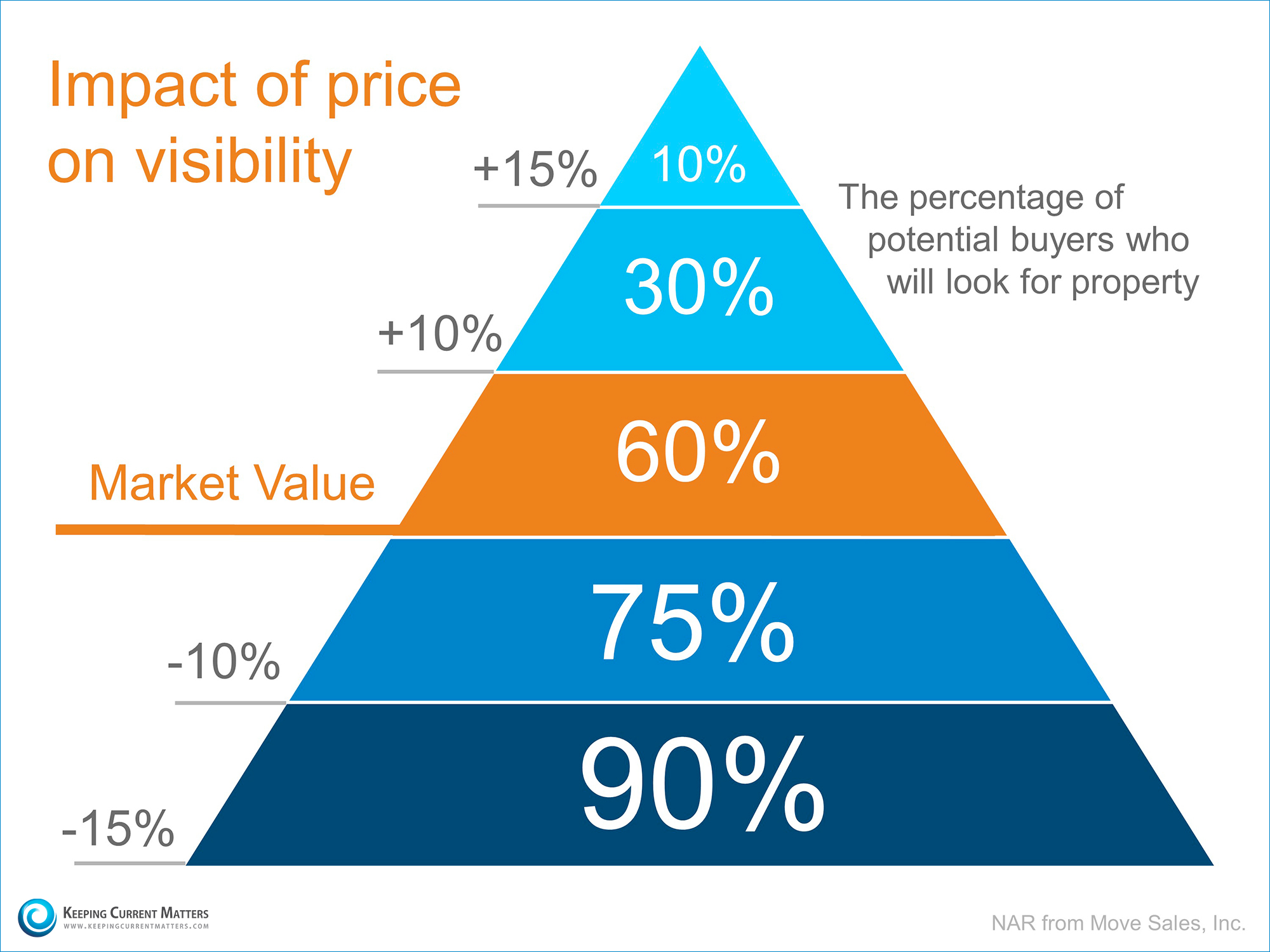 A better strategy would be to price it properly from the beginning and bring in multiple offers. This forces these buyers to compete against each other for the “right” to purchase your house.

Look at it this way: if you only receive one offer, you are set up in an adversarial position against the prospective buyer. If, however, you have multiple offers, you have two or more buyers fighting to please you. Which will result in a better selling situation?

The Price is Right

Great pricing comes down to truly understanding the real estate dynamics in your neighborhood. Look for an agent that will take the time to simply and effectively explain what is happening in the housing market and how it applies to your home.

You need an agent that will tell you what you need to know rather than what you want to hear. This will put you in the best possible position.

Posted in Home Values
no comments yet

The Main Reason You Should Not Wait to Buy… 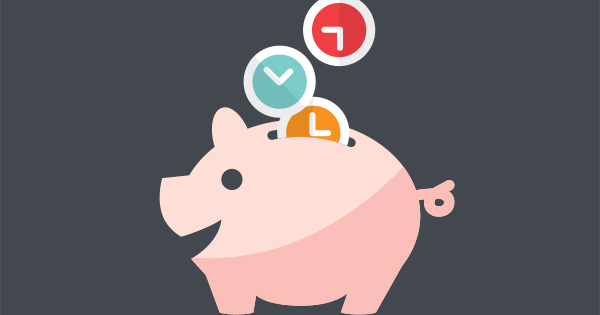 The Joint Center for Housing Studies at Harvard University recently released their 2015 State of the Nation’s Housing report. The report concentrated on the challenges renters in this country are facing because of the diminishing supply of quality rental units and dramatically escalating rents.

However, there was also information buried within the report that revealed that now is definitely the time to buy your first home or move-up to the home of your family’s dreams. With home prices still below peak values and mortgage rates still near historic lows, the monthly mortgage payment on a median priced home is less than at almost any time in the last 25 years.

Here is a graph which helps visualize the data from the report: 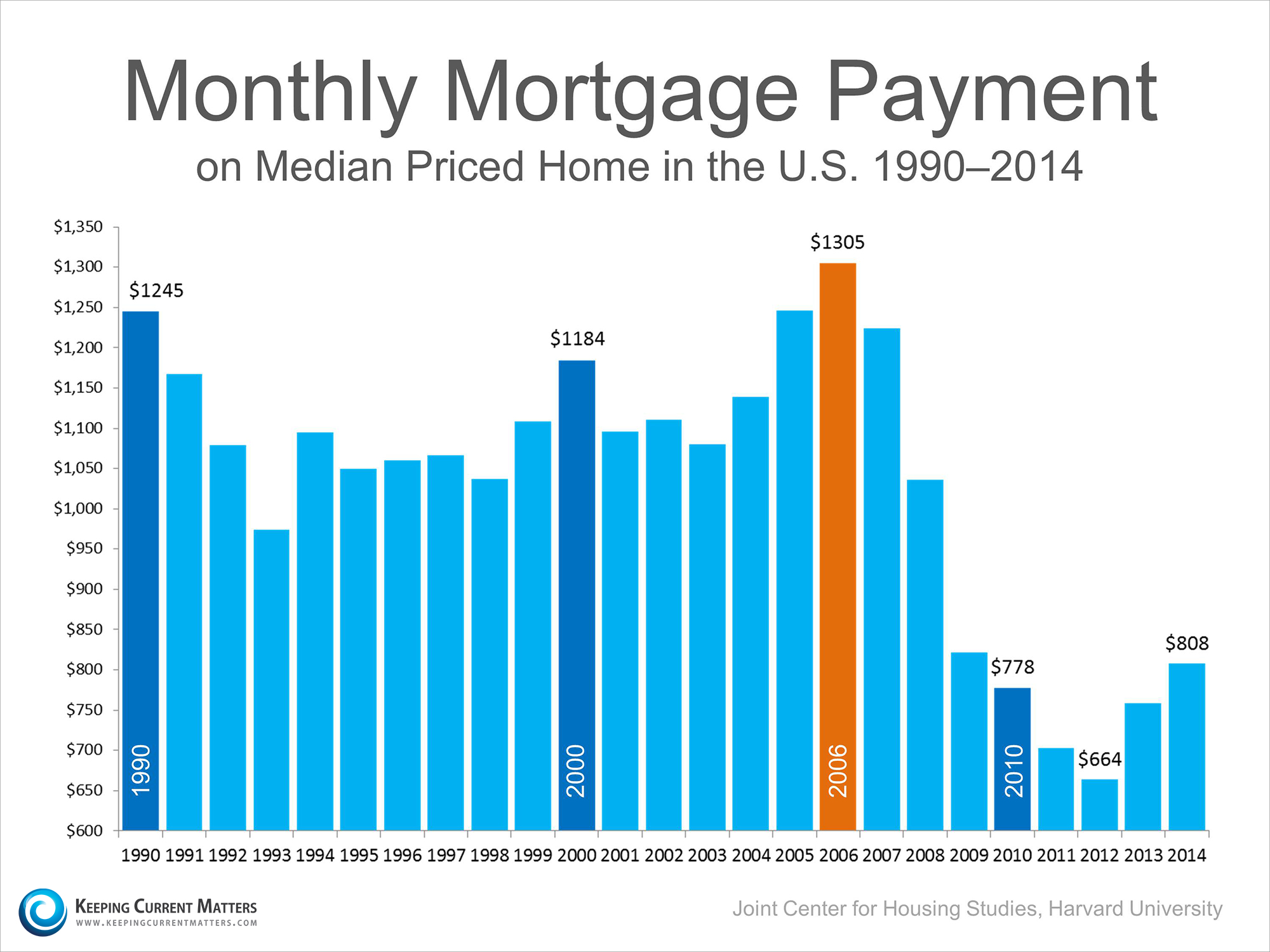 Posted in Market Trends
no comments yet

Why Zillow, Trulia and Other Free Home Value Tools Are Worthless!

Many home owners are taken in by the convenience and speed of seeking their home's value on the Internet.  There are plenty of web sites offering to fill that need.  Problems arise because none of these free web sites have access to the "sold" data which they absolutely must have to make an accurate value determiniation.  Only Realtors have access to "sold" data.  A recent test of the free AVMs on my own home showed that valuations are all over the place.  Here are the results, all taken on the same day - September 9, 2013:

Our brokerage has retained the services of a World-Class research firm out of Ft. Collins Colorado which pulls comparable sales directly from our MLS.  The data is the processed using regression analysis tools and predictive modeling to determine not only what your home is worth today, but how to price position your home in the market to sell within the next 90 days. 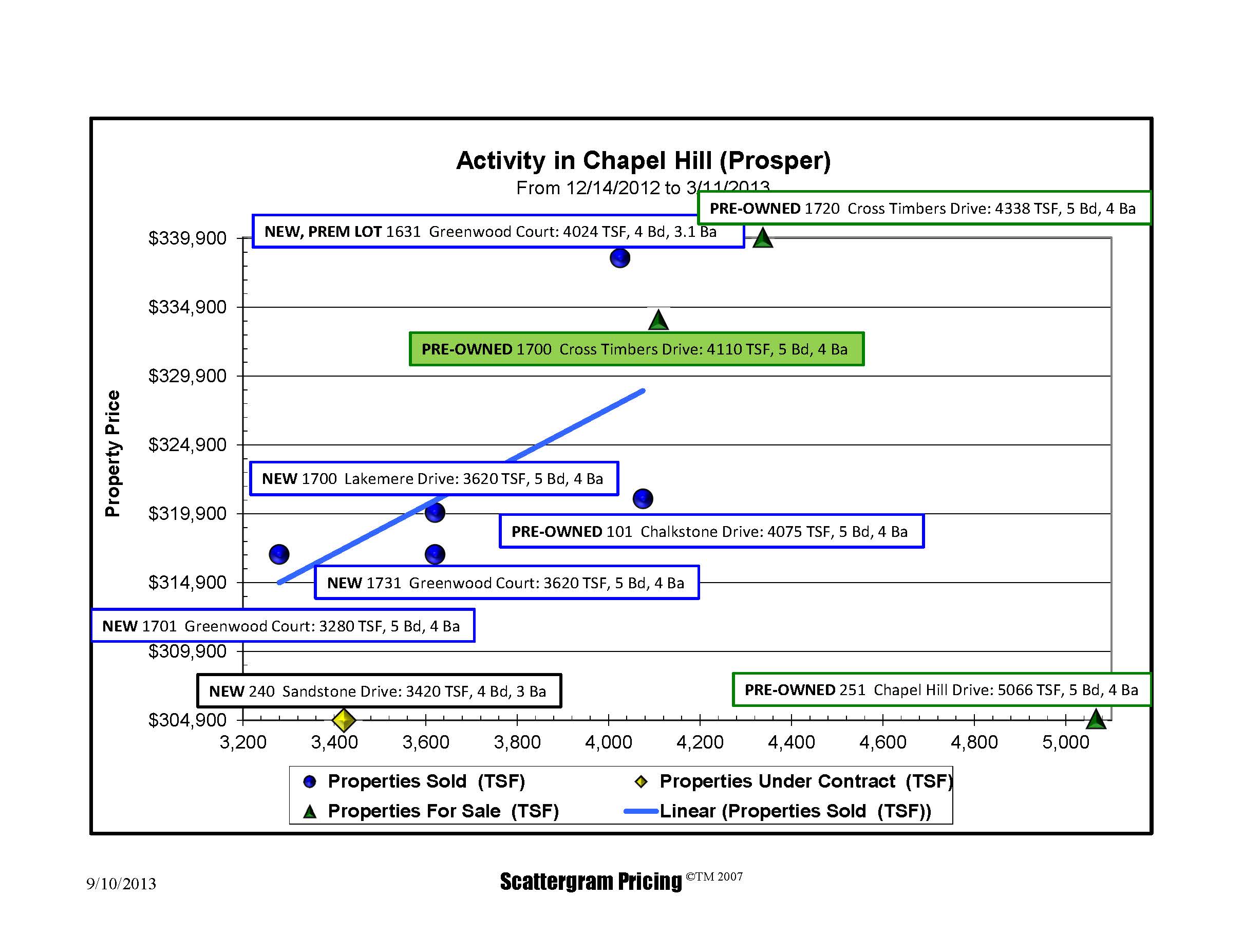 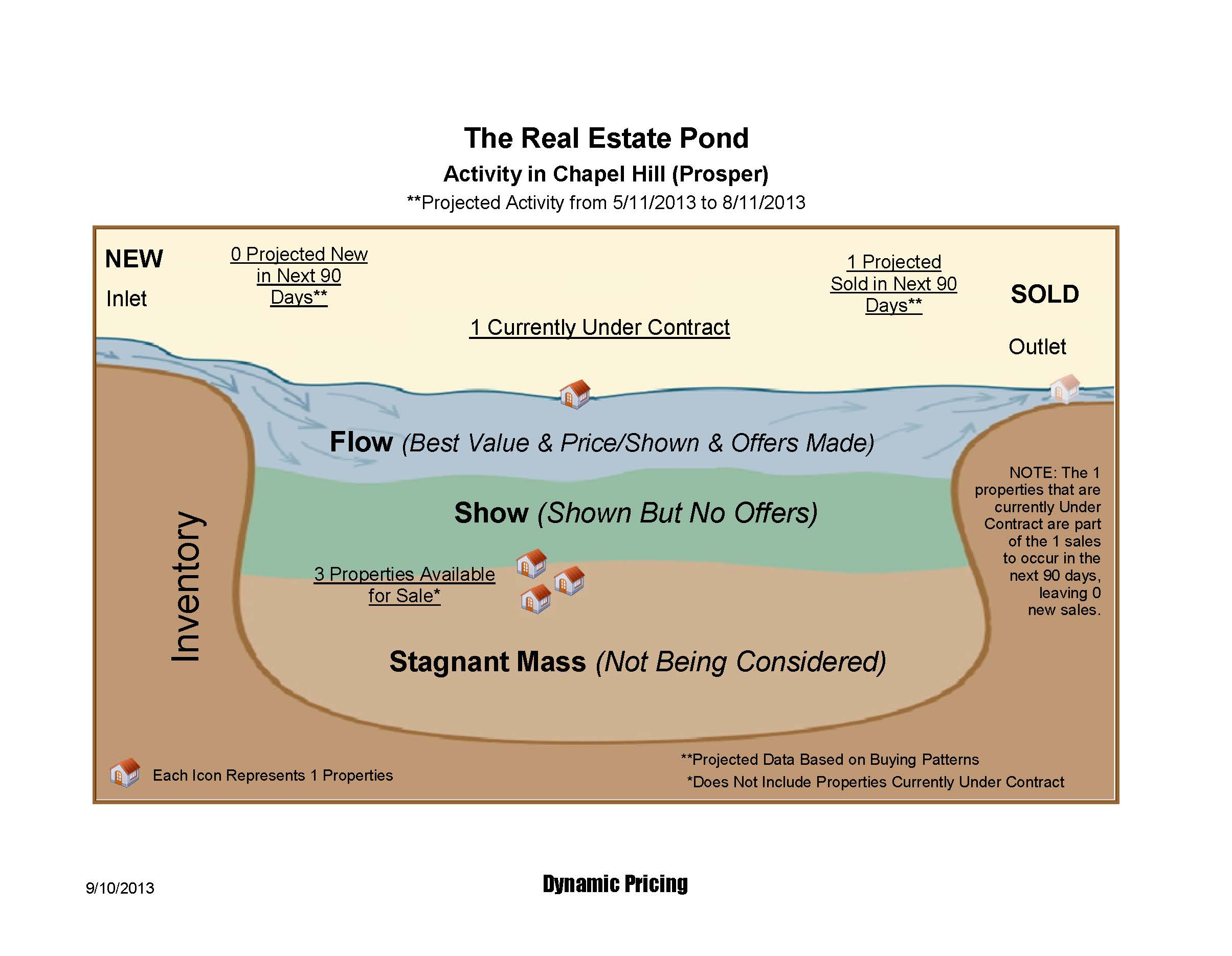 Here's why you need to contact us directly regarding the value of your home. 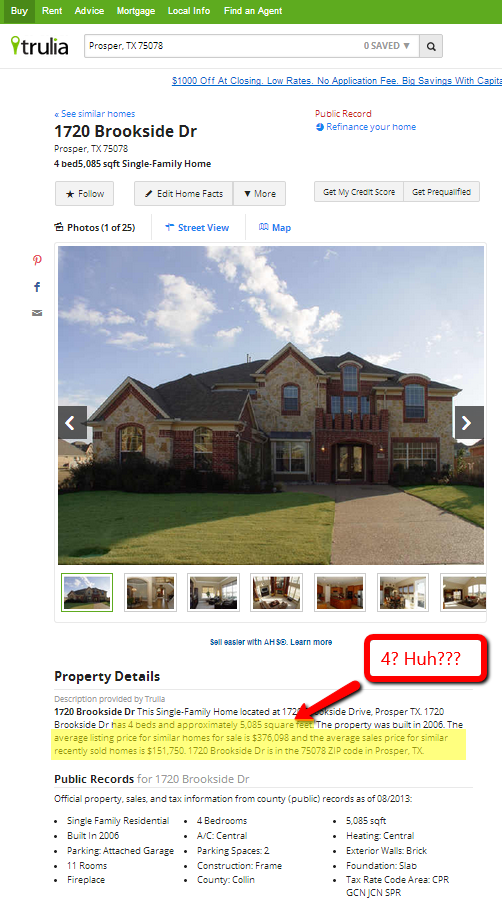 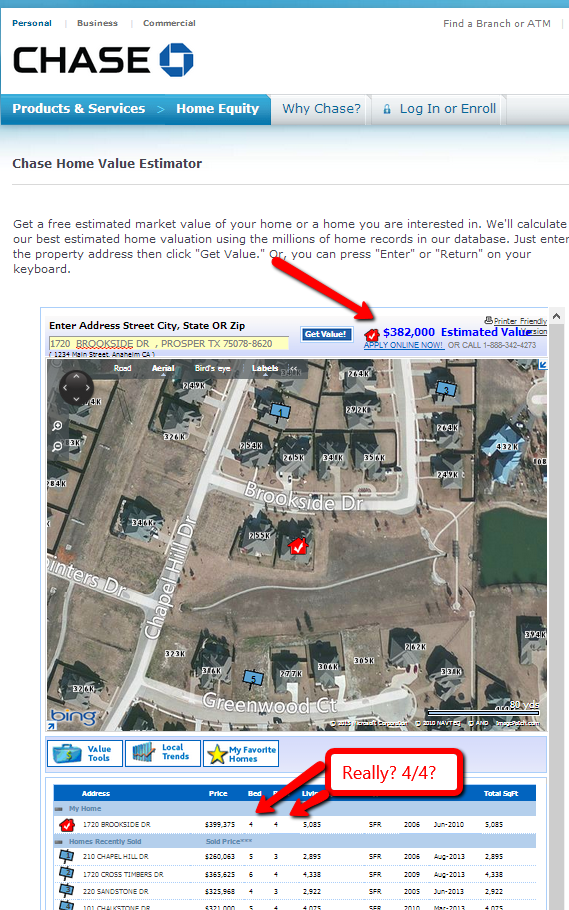 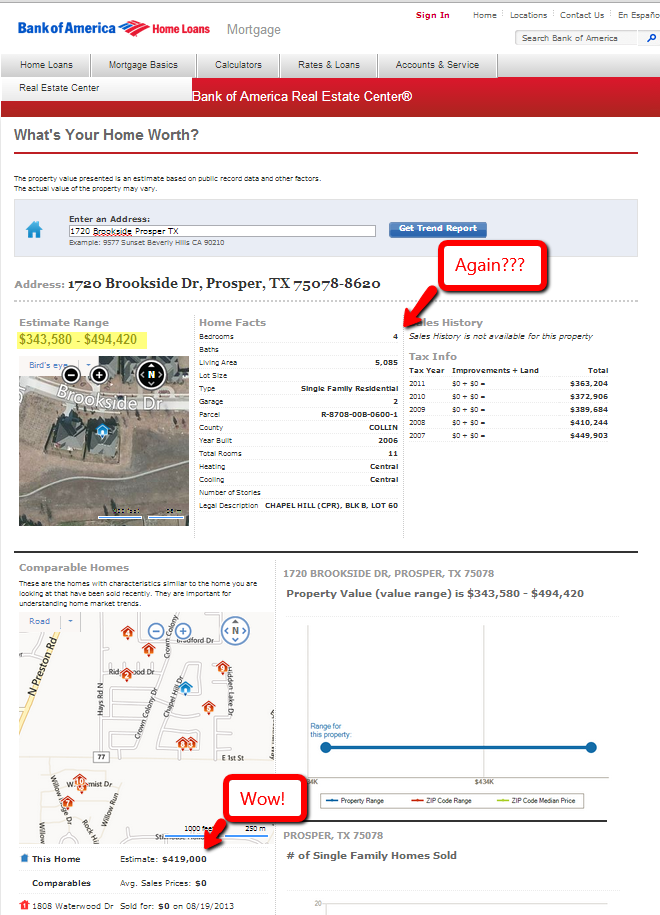 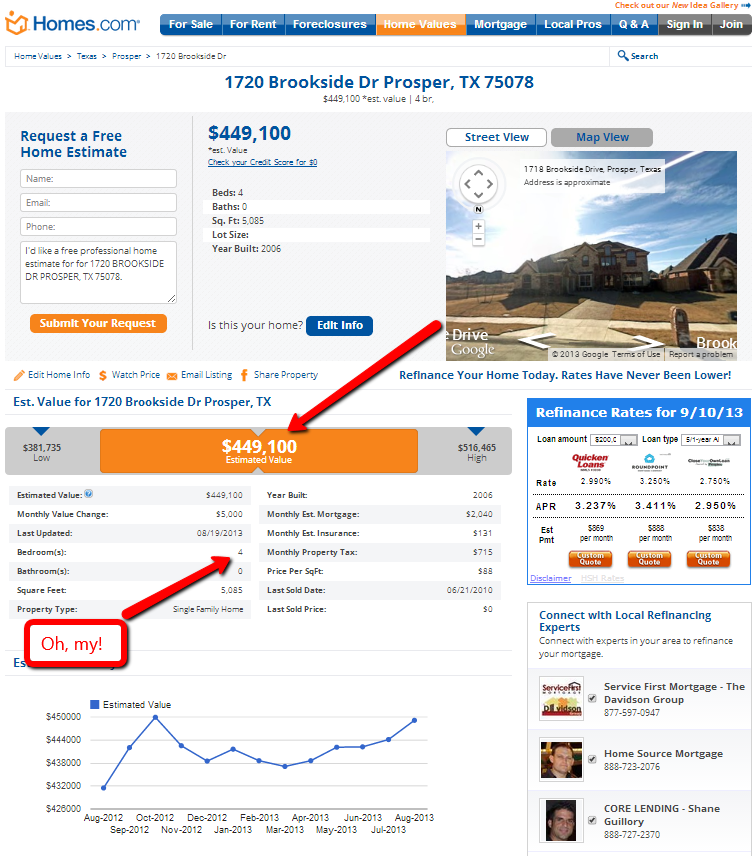 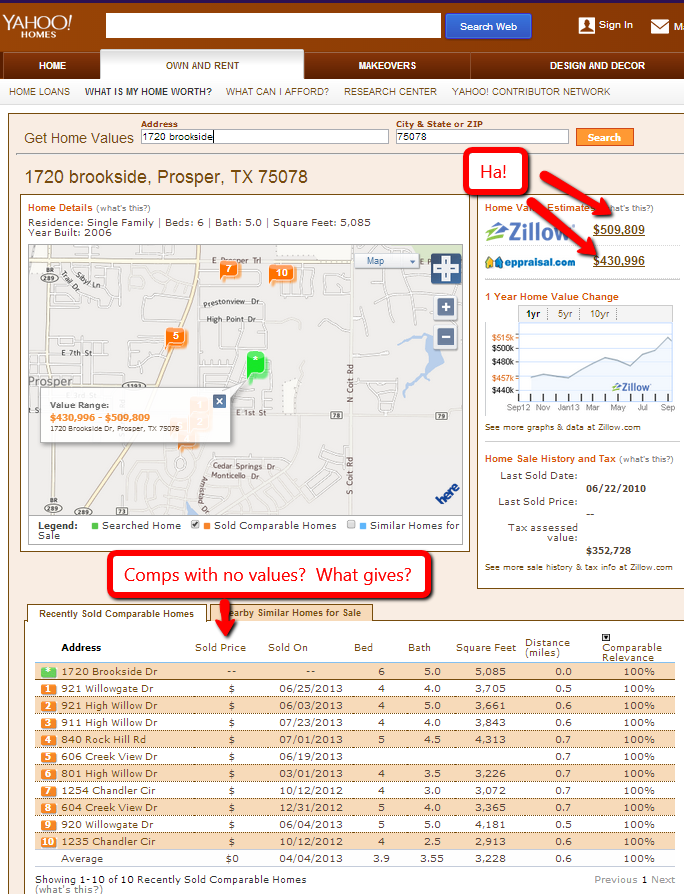 Posted in Home Values
no comments yet

This puts shadow inventory at a supply of 5.3 months and represents an 18 percent year-over-year decrease. The data provider also reported shadow inventory is 34 percent lower than the 2010 peak of 3 million. For its estimate, CoreLogic counts unlisted properties that are seriously delinquent, in foreclosure, or held as REOs as shadow inventory.

Currently, serious delinquencies make up the bulk of shadow inventory. Out of the total for shadow inventory, about 890,000 homes are seriously delinquent, while 761,000 are in some stage of foreclosure, and another 336,000 are REOs.

However, serious delinquencies, or mortgages past due by 90 days or more, are trending downward, falling to under 2.3 million in May, which represents 5.6 percent of mortgages.

“The stock of seriously delinquent homes, which is the main driver of shadow inventory, is at the lowest level since December 2008,” said Dr. Mark Fleming, chief economist for CoreLogic. “Over the last year it has decreased in 42 states by double-digit figures, resulting in rapid declines in shadow inventory for the first quarter of 2013.”

The state that accumulated the most completed foreclosures over the last year was Florida, where 103,000 homes have been lost to foreclosure.